By Siling-La
POSTED: 30 Aug 2022 21:10
CATEGORY: Short Story
FEATURED: Yes (Draconid_Jo)
(Go to comments)
Sorry its late. Life happens. It's a bit longer because of dialogue formatting, but I hope you enjoy it the same.


The crowing of the roosters woke Zachary up early. He still had another hour before he was supposed to get up and ready for school but he knew it wouldn't do any good to try and sleep. When he had got home yesterday, his stomach still hurt. He had to hide the pain from everyone, of course, but he didn't feel hungry and even sitting upright in a chair caused a stinging pain. The pain was dull now, but it hurt enough to make his dreams nothing more than a replay of what had happened.

He groaned as he rolled over, feeling cramped, but still trying to keep the warmth from the blankets. Once again the pain gripped him and so did the hatred for CJ.

"I don't care how big his gang is. I'll do to him what he did to me." Zachary's eyes narrowed and his fists clenched. "Today will be a much different day."

He hadn't seen any of CJ's gang or CJ all morning, but it was now his third hour class, Physics. Just two more hours until lunch and he could make his move. He didn't really have a plan. He had played it over in his mind so many times but he couldn't really plan anything solid. How could you predict what so many many people would do? All he really knew was that he'd have to fight through all of CJ's gang before he could get to CJ.

His thoughts were interrupted as someone dropped their books on the table right next to his own. Zachary looked up, startled to see an even more surprised-looking Carl.

"Not yet. I think they let me off with a warning. They-"

"It's what they usually do...hold you in some sort of grip while Ben gives ten good slugs to the gut."

"Wow. Lucky. CJ's never really done that. I wonder what made him."

"Yeah, well I'll figure out later." Zachary turned to the front with an intense look while Carl took a seat. He studied Zachary's face with confusion for a second and then realized what he meant.

"Zachary, listen! You will not win this fight. You're younger, weaker -no offense-, and smaller than all of them. And they are really good at what they do. If they let you off with a warning before, you're as good as dead if you face them again."

"No. There was a kid named Ryan who did the same thing. He left school in casts, Zachary!"

Zachary sighed. "Okay, here's what I've been thinking. CJ may be the biggest and strongest one, but from what I can see, he makes his gang do all the work for him. Am I correct in saying that?"

"So all I have to do is challenge him. Just him. Call him out. He'll most likely agree to defend his pride and his name around here. And he hasn't been in practice fighting, and as far as I can tell has done no training. I have. I think I could beat him."

Carl considered it carefully. "Okay...it makes sense to a certain extent. But this is CJ. You don't know him. He doesn't show mercy."

"Yeah, yeah, I know the stakes. But no one else stands up to him. So someone has to."

The bell rang for the period to begin. Carl gave Zachary a warning look. "Be careful."

Zachary just nodded and turned to the front as the teacher began the lesson.

Lunch hour came quickly. Zachary didn't really pay attention to the lessons and spent every moment planning the "what-if's" of what was to come. He grabbed his lunchbox thinking that if he won, he'd have time to eat after. He wasn't thinking clearly. The only thing his mind was focused on was the cold face of CJ as he ordered Jim to give him two.

He walked into the cafeteria. It was bigger than he thought. He didn't get a chance to see it yesterday so he went in not knowing where to look or what to expect. He saw CJ and his gang at a table to their own on the far end. With determination and a slight bit of fear, he marched towards it.

Big Jim was the first to see him.

Zachary didn't even look at him. He stared at CJ with fire in his eyes and placed his lunchbox down in front of Jim with a thud.

All the gang looked over to their leader, wondering what he would do in response to such an act of defiance. CJ didn't move. He didn't speak. He just sat calmly at the end of the table with his arms crossed. His shades still covered his eyes, but Zachary could feel him staring back.

Zachary spoke louder now. Loud enough to draw attention from all over the cafeteria. It soon grew quiet as all of the students listened to his words.

"It was your gang that drew the punches on me yesterday, CJ. You didn't. I have no respect for a man that hides behind his men like they're a shield. And neither should anyone here. You're nothing but a coward in my book. But if you're truly in charge here, then you'll accept my challenge. A duel. Me, you, right now. Man to man."

CJ spoke up. "What will this duel determine?"

"If I win, you and your gang have no power over any one of these students and are not allowed to touch a single one."

Jim snickered under his breath but the others stared in amazement at Zachary.

The fire in Zachary's eyes seemed to burn a bit brighter.

"Who said there had to be a condition to my defeat? I'm the challenger."

CJ chuckled. "I like your grit, Scott. If you ever give up, you can be a part of my gang anytime. But I accept your challenge."

He rose and walked up to Zachary. Face-to-face, everyone could see how small Zachary truly was compared to him. He turned to the students at the tables around him.

"Get out of here and move the tables to make room. Otherwise he might fly into one of them."

They instantly moved and the entire cafeteria filled again with silence as they circled around the pair. Even the teachers on duty joined the crowd.


If you enjoyed or would like to read other parts, check out The Cerberus Center where you can find links to all parts, more info and tools concerning this series.

(I'd like to think that I would've done the same thing in his position.)

ooooo this is getting good~ 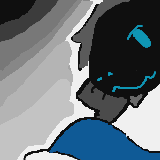 Oh boy, I really can't wait for the next one. I always like a good fight in stories.