The Fight For Survival: A Comical Tragedy: Part 1.3

By COMMANDER
POSTED: 23 Oct 2022 20:36
CATEGORY: Short Story
FEATURED: Yes (Rlad116)
(Go to comments)
Going to get real with you guys for a minute. One of the things, other than my wife and doctor smacking me with a vodka bottle to get me to quit drinking, was a car crash.

I have a '01 Dodge Stratus, coup. I used to do stupid stuff in that car. A lot of stupid mods too. That thing is powerful, considering it was brought back to life from a junkyard. A Frankencar, if you will. I still have it to this day, parked next to our Dodge Grand Caravan. It needs a new alternator.

Anyways, back in my stupid driving days, one night, my youngest sister wanted to drive it around the dirt roads. She was about 15 at the time. Well, she asked my drunk self if she could do a drift on the next turn. And my drunk ass answer changed my future, almost for the worst.

I said go for it.

Well, she drifted, handbrake and all, and did really well until we hit the corner. The car almost flipped over, the stop sign knocked out the rear window before being plowed to nothing, and thankfully, I wasn't wearing a seatbelt, because I kissed the driver side window, which acted as a cushion for my sister. She walked out unharmed, while I ended up with a broken hip. We wobbled the car back to Dad's, and she started feeling the gravity of the situation. I told her that I can get a new car, but not a new sister. I wasn't at all upset. Can't say the same for Dad and my wife, when I got home later. My brother had to drop me off.

It won't be hot in here tomorrow.


Editor's Note: Don't do stupid stuff in a car, especially when you're drunk. Even if you're not driving. He almost learned the hard way, thankfully, only the car was damaged.
+1 -0 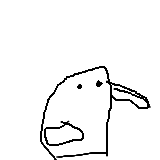